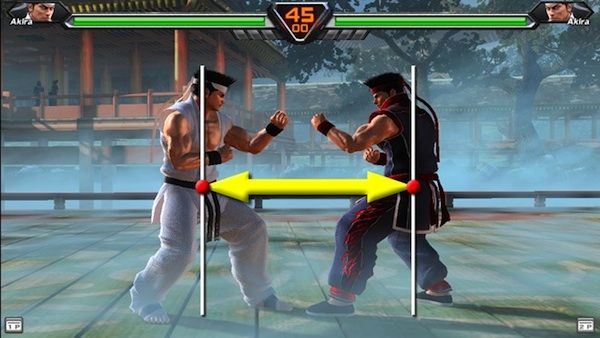 Have you ever had experience in which you feel the distance to be able to throw the opponent, is slightly short? The distance (shown as yellow arrow) between Akira and Kage (Figures 10−7. left) is the same compared with that shown in Figures 10−6. However, the gap between both waist (from red blob to blue blod) is still far from the ideal distance of Akira's throw.

The actual distance to throw each character has been shown in Figures 10−8. You will probably be surprised to see the figure, in which Akira is trying to shake hand with Kage.

In contrast, you should perceive the distance to be able to throw Blaze is slightly wide (Figure 10−9). At first this looks too far to throw but the distance (yellow arrow) between Akira and Blaze is the same one shown in Figure 10−6. 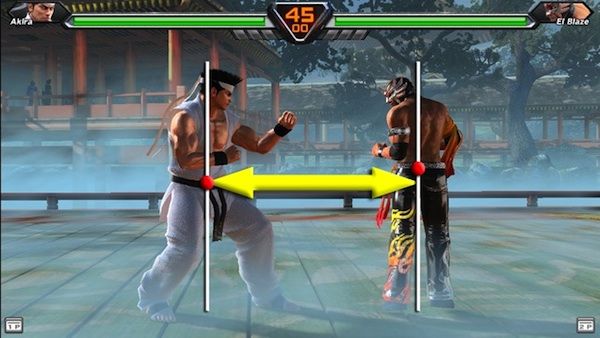 A dramatic example occurs when Player 2 is recovering from a missed Attack (standing state) or Throw attempt. In the example below, Player 1 successfully evades Player 2’s High Attack with crouching (Figure 10−10). The distance (yellow arrow) between Akira and Kage (Figure 10−10. left) is the same as was with the case mentioned above (Figure 10−8. left). However, if Player 2’s High Attack whiff Player 1, the gap between both waist (from one red blob to another red blob) would be the ideal distance of Akira's throw. hence, Player 1’s High Throws could connect an awkward opponent, like Kage.

Have you ever had experience in which High Throws fails miserably though you are close enough to say hello? As mentioned in chapter 9, it would be a problem with foot stance![3] In all examples demonstrated above, both Player 1 and 2 have their left foot forward and right foot back, namely Closed Stance. It is worthy to note that in Open Stance, feet protruding forward often prohibit access concertedly.