Input Lag has been proven to be a detrimental to fighting games. If you move stick to left, there might be a delay before the on screen character moves to the left. Input Lag might interrupt combo and set-up. You would confirm Input Lag as it is really annoying. In video games, Input Lag is either the delay between the television or monitor receiving a signal and it being displayed on the screen (section 1・1), or the delay between pressing a button and seeing the game react (section 1・2).

1・1  Difference between a Television and Monitor

Technically, a television has tuners but a monitor does not. In order to watch TV, you need a tuner. It doesn't matter if the tuner is in your monitor or provided by your TV service provider. However, this is not the end of the matter. You shall want to mainly play fighting games and may be hook up your computer. Which one is better for gaming in terms of Input Lag? TVs and monitors retain certain amounts of Display Lag. Image processing (such as upscaling, 100 Hz, motion smoothing, edge smoothing) takes time and therefore adds some degree of Input Lag.

The vital discussion is that some people notice Joystick Lag even when using wired controllers, but this is beyond the scope of this chapter. You are referred to ‘Wiki’[2] or 'TEYAH・NET'[3] for a much more detailed analysis. Needless to say, wireless controllers have further contributions to the Input Lag.


The video above showing one set of 50 trials for the PS360+, tested against the HRAP VX-SA (lagless, control stick). Tested in Guilty Gear XX Accent Core +R, using the throw break mechanic which makes it easy to see the difference in timing.[3]

This section follows the style of 'VFDC Wiki'.[6] Virtua Fighter 5 is primarily played using a Joystick and three Buttons, Guard G, Punch P and Kick K. The Joystick and Button layout is shown in the image below (Figure 1−1). 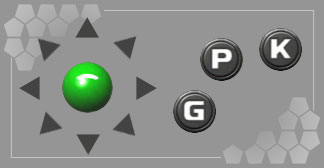 
Virtua Fighter 5 utilizes all eight directions of the joystick, and neutral. Graphically, a joystick tap in a particular direction is indicated with a white or un-filled arrow (Figure 1−2). Textually, we use the numbers on a 10-key number pad to indicate direction taps.