This chapter follows the style of 'VFDC Wiki',[1] with some revisions which shall add important principles. The strategy based on Foot Stance had been recognized since Virtua Fighter 2 (since 1994). Most of the examples in previous chapters have been of strategies that involve no concept of Foot Stance. They have indeed all been basic strategy of attack. We hope this has established the basic strategies but we would now turn to Foot Stance that is an important concept that can play a major role within the Virtua Fighter system.

In every Virtua Fighter game, the relation of each player's foot position would be collectively known as Foot Stance.

Stances can be one of two types:
・Closed
・Open

Closed Stance refers to the case where each player has the same foot forward (Figure 9−1). 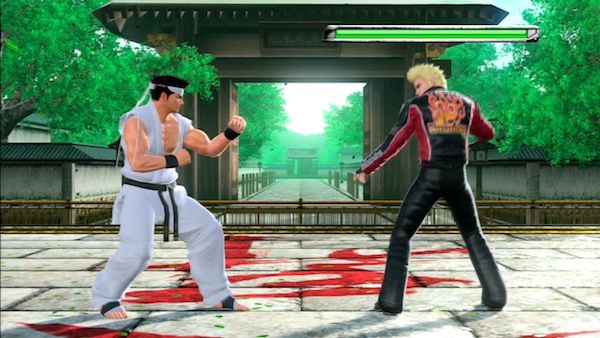 
In the left figure below, both Player 1 and 2 have their left foot forward and right foot back (Figure 9−2 left). This is the default starting stance that both players will have at the beginning of each round. In the right figure, both Player 1 and 2 have their right foot forward and left foot back (Figure 9−2 right). The term Closed Stance originated from a reference to door positions. If you imagine a line connecting Player 1's feet, and another line connecting Player 2's feet, then the two lines would look like ／／ or ＼＼ resembling a closed door when viewed from above.

Open Stance refers to the case where each player has an opposing foot forward (Figure 9−3). 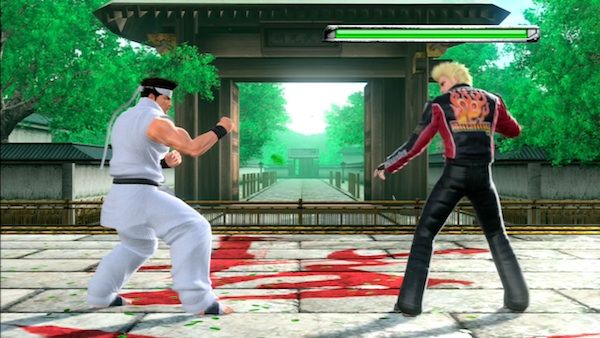 There are 7 main applications of stance within Virtua Fighter system:

Don’t be concerned if you are weak in Foot Stance discrimination. Each chapter will strengthen your understanding, in which you would gradually acquire skills to discriminate the stance. The key note is that:

As a brief discussion, 2 simple examples of Foot Stance discrimination are demonstrated in this section.

In the figure below, the end of stage exists on a back side of Player 1 (Figure 9−5). Player 1 has to choose the best attack for him. At 7 frames advantage,[9] Player 1 attempts Chouzan Housui 46P+K (19 frames attacks) against Player 2's 12 frames standing punch P. Player 2 is blown out in a direction orthogonal to the end of stage, which results in Ring out.

These examples above reveal an important concept in this game. To put out opponent from ring with attacks, all you have to do is to recognize own Foot Stance. Needless to say, the same is true of combos (See the video below).[10,11] This applies to attacking-throws, e.g. Akira’s Hontei Goko Hazankou, too (Figure 9−7).

In contrast to attacks, the condition after throws depends on only Foot Stance of opponent. A dramatic example occurs in the production of the following Akira’s combo (developed by Gomimushi Akira and Kan. See the video below).[12] Now the wall exists on a back side of Player 2, and then Player 1 throws with Youshi Senrin 64P+G (Figure 9−8). In this scenario, Player 2 was driven by Youshi Senrin into closes proximity to wall, and then Player 1 would obtain an opportunity of exceptional follow-up combo (click here if you want to see follow-up combo 1). Notice that Player 1 doesn't have the chance of this combo at the inverted foot stance of opponent (click here if you want to see Supporting Information).

The next example will introduce another Wall Hit Effect. The wall exists on a front side of Player 2, and then Player 1 throws with Ryushu Katou 214P+G. Player 2 would be driven into closes proximity to wall (Figure 9−9).


Notice that the wall now exists on Player 2’s side. In this scenario (11+3 frames advantage),[13] Player 1's Hou'ou Soushou 6PP is guaranteed and generates Special Wall Stagger which is one of the most heavy stagger (Figure 9−10).[14] Indeed, Player 1's Rouko Kensou, Kokei 3P, would be guaranteed even though a great deal of work has been done on the reduction of the stagger time (click here if you want to see follow-up combo 2).


These examples above demonstrate another important concept in this game. To drive opponent into the end of the ring with throws, all you have to do is to recognize opponent’s Foot Stance. The general properties of Throws are the topic of the next chapter.[15]